While civil war rages on the Syrian battlefield between regime loyalists and myriad rebel factions, another battle is taking place in the media world. Al Arabiya and Al Jazeera, the two Gulf-based channels that dominate the Arabic news business, have moved to counter Syrian regime propaganda, but have ended up distorting the news almost as badly as their opponents. In their bid to support the Syrian rebels’ cause, these media giants have lowered their journalistic standards, abandoned rudimentary fact-checks, and relied on anonymous callers and unverified videos in place of solid reporting. 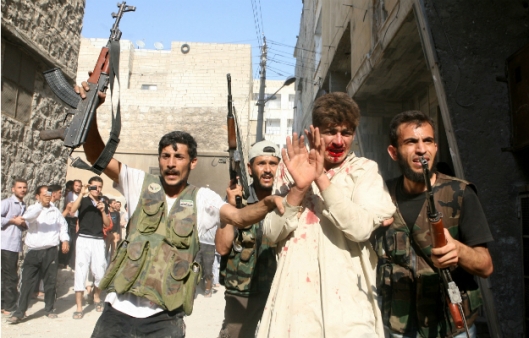 Al Jazeera and Al Arabiya were founded by members of the Qatari and Saudi royal families, respectively, and their coverage of Syria faithfully reflects the political positions of their backers. There’s big money behind both stations: Al Jazeera was created with a $150 million grant from the emir of Qatar in 1996, and annual expenditure on the network’s multiple channels reached nearly $650 million by 2010, according to market research firm Ipsos. The story is similar with Al Arabiya, which was launched in 2003 with an initial investment of $300 million by a group of Lebanese and Gulf investors led by Saudi businessman Waleed al-Ibrahim, the brother-in-law of the late Saudi King Fahd. Hard numbers on the annual operating budgets of these channels aren’t known, but they’re likely to run into the hundreds of millions of dollars. The much smaller, U.S.-government financed Alhurra, by way of comparison, costs around $90 million annually to run.

Coverage of the Syrian uprising has drained these channels’ resources. Prime-time advertisements have been reduced or canceled altogether, thereby decreasing revenues. In place of carefully reported segments, some newscasts rely almost exclusively on citizen journalist “eyewitness” accounts and uploaded media footage readily found on YouTube. For the non-Arabic-speaking viewer, news coverage of Syria on these channels is akin to CNN’s iReport — the monthly interactive half-hour citizen journalism show — but for several hours a day. It is not uncommon to tune in to either channel and find that the first 20 minutes of a newscast consists of Syrian activists — some with shady backgrounds — based either outside or inside Syria reporting via Skype on events that took place hundreds or thousands of miles away.

When Al Arabiya and Al Jazeera do comment directly on Syrian affairs, they tend to paper over the rebels’ flaws and emphasize the conflict’s religious fault lines. Perhaps the low point of both channels’ Syrian uprising coverage was when they gave a platform to extremist Sunni cleric Adnan al-Arour, who once said of Syria’s Alawite minority that Sunnis “shall mince them in meat grinders and feed their flesh to the dogs” for their support of President Bashar al-Assad. While Al Arabiya referred to “the sheikh” as a “symbol of the revolution,” Al Jazeera introduced him as the “biggest nonviolent instigator against the Syrian regime.”

These Arabic-language stations have done their worst work when the political stakes of their coverage are the highest. In early July, Brig. Gen. Manaf Tlass, a close friend of the Assad family and son of a former Syrian defense minister, fled to France. Several weeks later, he broke his silence via Saudi media and embarked on a religious pilgrimage to the kingdom, offering himself as a unifying figureto lead Syria’s dysfunctional exile opposition. Only within the realm of fantasy would Syrians — who have paid with the blood of thousands to bring down the Baathist dictatorship — agree to allow a former regime insider to succeed Assad.

But that seems to be the scenario that Al Jazeera and Al Arabiya are not only taking seriously, but perhaps supporting. Both channels initially covered Tlass’s defection extensively, but after Tlass chose to make his statements exclusively to Saudi media — including Al Arabiya and the newspaperAsharq al-Awsat — Al Jazeera shunned him. Al Arabiya described the defection of Tlass — who held no power whatsoever at the time of his departure — as a “severe blow” to Syrian military power. It also recounted how several of his family members oppose the regime, but failed to mention his uncle Talal, who currently serves as deputy defense minister.

To be sure, reporting from inside Syria is perilous. The country is, in fact, the most dangerous place in the world for reporters, according to the Committee to Protect Journalists. Bloggers and journalists have been repeatedly detained by the regime since the conflict began, and at least 18 journalists have lost their lives in the country since November. Furthermore, government minderscontinuously accompany reporters who are allowed into the country.

1 thought on “Breaking the Arab News”