In an effort to move forward in conflict-wracked Syria, Russia is currently advocating for the creation of a transitional government that would oversee the task of organizing and carrying out a transparent presidential election. 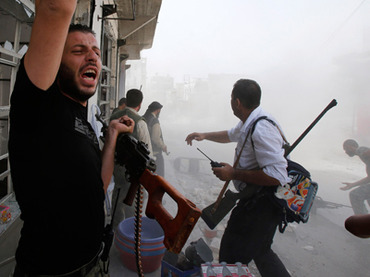 “We’re putting significant effort into convincing both the Syrian opposition and the government to implement Geneva agreements,” Bogdanov told RT. “The Syrian government has already agreed to this in principle, while some members of the opposition forces are also in agreement with us.”

Bogdanov believes that the warring parties must immediately adhere to a ceasefire and begin implementing Kofi Annan’s peace plan.

“The solution (to resolving the crisis) lies in promoting talks not only between various opposition groups, but also between the opposition and the Syrian government as advised by the Kofi Annan plan,” he said. “Annan’s plan says the opposition must agree to hold talks with the government, and we believe that is the right direction out of the conflict.”

When asked by RT if he succeeded in convincing the French side and the Syrian opposition to agree with these goals, Bogdanov said he was optimistic: “The government in Damascus accepted the initiatives despite certain doubts that were quite understandable. … The government even went so far as to produce a list of officials ready to enter into negotiations with the opposition under no set preconditions and with an open agenda.”

Each party at the negotiations will have the right to add issues to the agenda and expect a fair debate, he said, adding that despite Kofi Anan stepping down from his position as Special Envoy to Syria, “his plan remains viable.”

Bogdanov also announced that Syrian President Bashar Al-Assad would not go against the will of his people and cling to power if he were to lose in the presidential election.

“Assad told us that, if the people no longer want to see him in power and elect another leader during presidential elections, he will leave office,” the Russian diplomat told French media in a separate interview.

Russia has never insisted that Assad remaining in power was a precondition to negotiations, Bogdanov said.

“But we also say that it is not the Russians or the French to decide upon the resignation of the Syrian president,” he stressed.

The Russian minister reiterated his call for the implementation of UN Security Council resolutions 2042 and 2043, otherwise known as the Kofi Annan peace plan, and the final communique of the Syria Action Group, held on June 30 at the Geneva ministerial conference.

Russia hopes the proposed plan will put an end to violence in Syria, and mark the beginning of a political process.

“The emphasis [of the Paris negotiations] was on the need for the opposition to agree rapidly on a common platform for promoting a peaceful resolution of the crisis by the Syrian people themselves, ruling out any foreign intervention and paving the way for a broad national dialogue without preliminary conditions,” the Russian Foreign Ministry said in a statement.

Russia has proposed to organize a representative conference of Syrians similar to the one that helped to bring an end to the 1990 civil war in Lebanon.

Such a conference would bring together representatives of the opposition and the regime, together with a diverse group of negotiators from the Muslim, Christian, Alawite and Druze communities. This would redirect the crisis onto the path of non-violence and outline the contours of a new Syria, Bogdanov told French media.

But the first step to reconciliation is ending the violence and enforcing a ceasefire from both sides in the conflict, he said.

Bogdanov fears that the ongoing conflict in Syria could continue for a long time, saying the Assad government is still strong and enjoys solid public support, which is largely based on fear of the unknown.

“This support is not motivated by love of the Syrians to Assad, but rather the fear of those who would succeed him,”Bogdanov said. “Indeed, there is a risk of the Somaliazation of Syria.”

Meanwhile, Russia does not rule out the possibility that the Syrian opposition may be able to overthrow the Syrian government, while stressing that such a development that this will not stop the civil war.

According to his estimation, “no party is currently able to maintain its positions, which drags out the conflict.”

When asked if he knew of a Syrian figure who could lead a transitional government, Bogdanov argued that this was a question better answered by the Syrian people.

“Neither Russia, nor the US, nor France can impose a leader on the Syrian people,” he told RT. “And we would assist such an election taking place as soon as possible in order to let the Syrian people freely choose their country’s leadership.”