With the ceasefire in Syria mostly holding and more and more areas joining the truce, families long separated by war are finally being reunited. RT’s Lizzie Phelan talked with two families whose stories are alike, yet at the same time are very different.

Areej was taken from the city of Adra in Damascus province. Militants pointed a Kalashnikov at her in front of her two young daughters and abducted her. After three years of captivity, she is now safely back at home with her husband and children.

“That moment when I saw my daughters, I started screaming like crazy – I could not believe it – I felt like I wasn’t really seeing them… I hugged them and cried, but I didn’t feel as though I was hugging them – I felt like I was hallucinating,” Areej told the RT crew. 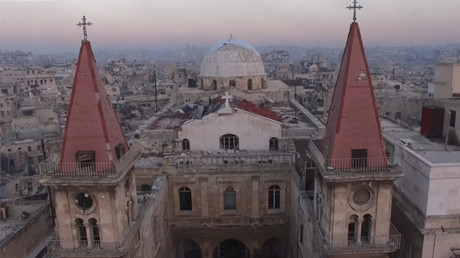 She described how, after being kidnapped, prisoners were unscrupulously divided between the various rebel groups fighting in the area and were moved around.

“At first we were in the custody of Jaish al-Islam, then they separated us between different factions. Every militia fighting in Adra was rewarded with more captives according to how effective they were on the battlefield. The biggest group of captives was awarded to Jaish al-Islam.”

She and her husband Ghais also explained that along with many others, Areej was taken not to be killed, but to be used in the militants’ scare tactics.

“It’s worse than death. If I know my wife is dead, then ok, she is dead, [but] every day they would call me and tell me they would cut her arm off or her leg, that they will take a photo of her arm that they cut off and send it to me. This was their way to frighten me,” Ghais recalled.

Although Areej is now safely back home, the family’s suffering is far from over – Ghais’ sister is still being held captive. And Lizzie Phelan reports there are numerous families with no information on the whereabouts of their loved ones.

Asmahan lost her husband and two of her three sons to the militants over four years back. A video filmed by rebels in 2012 is the last time they were seen alive. Asmahan says she has no way of knowing if her husband and sons are alive, despite her repeated inquiries with authorities into their fates.

“I feel like I have lost my mind […] I have lost three people, I don’t have anyone, just my son. My other two sons, they are part of me, they have gone and I have no information about them,” Asmahan says.

Her remaining son is yet another reason for her to worry, as at any moment he may have to join the military. To save him, Asmahan has to register the missing family she is still waiting for as dead, as well as pay all legal fees for the procedure, which is a heavy burden on a family that has lived amid war for the past four years.

Asmahan says her greatest wish is to find out the truth about her kidnapped family.

“For the last four years, when I wake up, I wake up like I am in a nightmare.

A ceasefire deal between government and rebel forces in Syria came into force just before the new year, offering at least some hope of reunification for Areej’s and Asmahan’s families. The deal – brokered by Russia, Iran, and Turkey, and approved by the UN Security Council on January 2 – aims to bring about peace talks later this month in Kazakhstan.

The rebels, however, have threatened to suspend their participation if their demands are not met by Damascus in the near future. These include the Free Syrian Army, one of the biggest opposition coalitions. Islamic State (IS, formerly ISIS/ISIL) and Al-Nusra Front terrorists are not part of the deal.

Despite the ceasefire efforts, militias have already broken the truce on a number of occa