Whenever John McCain travels outside the US, you can guarantee trouble will follow.

Following the recent elections in Serbia of Aleksandar Vucic, the Serbs have taken to the streets to demonstrate, unhappy with the election result. 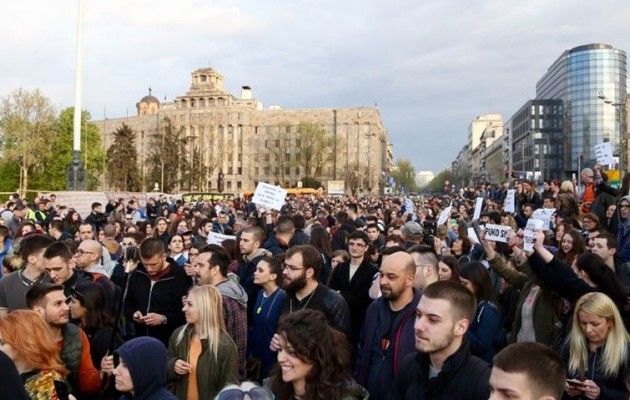 Demonstrations all over Serbia – Balkan Insight

McCain is in Serbia to make sure that Vucic will continue talks with Kosovo, so that they can rush Serbia into the EU and away from Putin. As the Cold War has never been over as far as the Balkans are concerned and the US has only one agenda and that is to get as many countries into the EU and NATO away from Russia.

The US controls Kosovo with the largest military base outside of the US and are presently building a new Embassy which could possibly one of the biggest they have. Kosovo belongs to the US as far as they are concerned and they see it as America in Europe, which they will never give up.

The President and Prime Minister of Kosovo are puppets of the US and were put in power illegally after the last election. The man who should be Prime Minister Ramush Haradinaj was arrested in France on his way to the US, to see Trump. The arrest warrant was sent out Serbia and had long expired. To this date, even though Hardinaj has not been charged he is still being held in France.

The Kosovo opposition parties want Kosovo to re-join back with Albania as it once was, but the US will never allow this, because they see it as their footprint in Europe. The Albanians in Kosovo hate the Kosovo flag that was forced on them by the EU and proudly fly the red and black Albanian one.

Since the elections, the once Mayor of Prishtina and now Prime Minister Isa Mustafa has systematically arrested the opposition politicians and supports on trumped up charges under the direction of the US Ambassador, Greg Delawi who has been interfering in Kosovo politics ever since he arrived in Kosovo. The illegal arrests of the the opposition party Vetevendosje, took a turn for the worse, when a medical student Astrit Dehari, who was arrested, with no charges, was found dead in prison. The police first said he had died of a drug overdose, but an autopsy showed he was murdered, when the top of a honey bottle was found down the back of his throat. Recently a witness, who was going to give evidence against the police in the Astrit Dehari trail has now been killed.

The Kosovo people who once respected the US for saving them have changed their tune, since the US are protecting President Thaci and Prime Minister Mustafa, who are the most corrupt in the country. The EU dangles a carrot saying that Kosovars can get free movement, but only when they control corruption, yet the US are protecting the most corrupt. It is a vicious circle with no hope in sight, which was the reason for the mass exodus, just after the elections.

Seeing how the US are trying to promote peace talks between Serbia and Kosovo at the expense of the Kosovars, just to get Serbia away from Russia, just makes the Kosovars turn their back on the US.

There will be no peace between the two countries until Serbia gives up the missing Albanians that they killed and took to Serbia. In the past they have used the dead bodies as a bargaining chip and only give up a few at a time when they want something in return.

Demonstration calling for Ramush Haridinaj to be returned to Kosovo

John McCain can huff and puff all he wants but there will be no peace talks and wherever he travels terrorism follows. This trip will signify more trouble in the region as there are demonstrations in Macedonia since their elections and some unhappy that Montenegro has just been accepted into NATO.

The US are flexing their muscles in the Balkans purely to annoy Russia and the only way to get rid of the Americans is for Kosovo to join Albania.

The US call Kosovo their success story, but it is far from it.