WikiLeaks founder Julian Assange has lashed out at Hillary Clinton, calling her the “butcher of Libya” who knowingly slaughtered innocent civilians.

Earlier in the week, Hillary said she took “absolute personal responsibility” for her election loss, but added that she “was on the way to winning until a combination of Jim Comey’s letter, on October 28, and Russian WikiLeaks raised doubts in the minds of people who were inclined to vote for me, but got scared off.”

In response, Assange issued a scathing attack at the former Secretary of State, calling her a liar and a murderer. 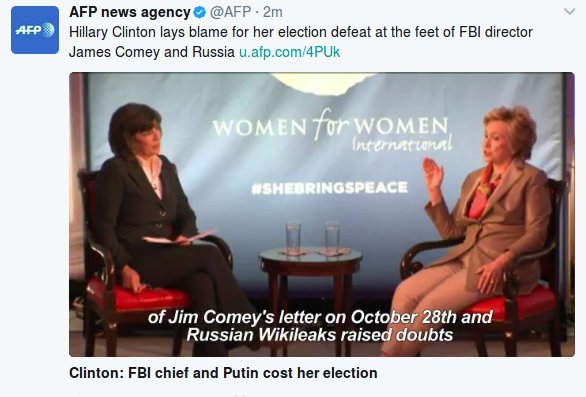 Two lies in one screenshot: the butcher of Libya–Hillary Clinton–blames “Russian WikiLeaks” while sitting in front of #SheBringsPeace sign

Rt.com reports: On Wednesday a lawyer for Assange said a request had been filed with a Swedish court to rescind a detention order against him, claiming it should be granted on the grounds that it was now evident the US wants to arrest the WikiLeaks editor.

Assange has been in the Ecuadorian Embassy in London since 2012 to avoid extradition to Sweden, fearing a handover to the US to face prosecution for WikiLeaks’ publication of thousands of classified military and diplomatic cables.

Per Samuelson said rescinding the order would not hamper the Swedish prosecutor’s investigation into allegations of rape filed against Assange. The lawyer claimed they could continue with the investigation with Assange in Ecuador.

“If they want to charge him and go to trial, that can happen just as well with him at liberty in Ecuador since that’s the only place he can be,” Samuelson said, reported Reuters.

A previous request was rejected by Sweden’s Supreme Court on the grounds that Assange was unlikely to be handed over to the US by Sweden, claims Samuelson.

“Given that the US is obviously hunting him now, he has to make use of his political asylum and it is Sweden’s duty to make sure that Sweden is no longer a reason for that fact he has to stay in the embassy,” Samuelson said.

Last month sources in the Department of Justice told the CNN and the Washington Post that charges were being prepared against Assange.

Attorney General Jeff Sessions told reporters that his arrest was a “priority,” describing documents revealed by WikiLeaks as “quite serious.”

“We’ve already begun to step up our efforts and whenever a case can be made, we will seek to put some people in jail.”

CIA Director Mike Pompeo, whose organization has become the subject of WikiLeaks #Vault7 series of leaks, said he would be pursuing Assange.

The #Vault7 leak, which WikiLeaks claims originated from the CIA centre in Langley, Virginia, has revealed sordid details of alleged CIA hacking techniques, including the ability to spy via Smart TVs and hide traces of their hacks.