Wikileaks’ Julian Assange is continuing his attempt to “take down America any way he can” by accurately reporting the truth.Saturday on Twitter, Assange highlighted an article from Thursday where the Financial Times noted how many Syrian rebels are getting salaries from the CIA.

Assange said they “buried the lede”: 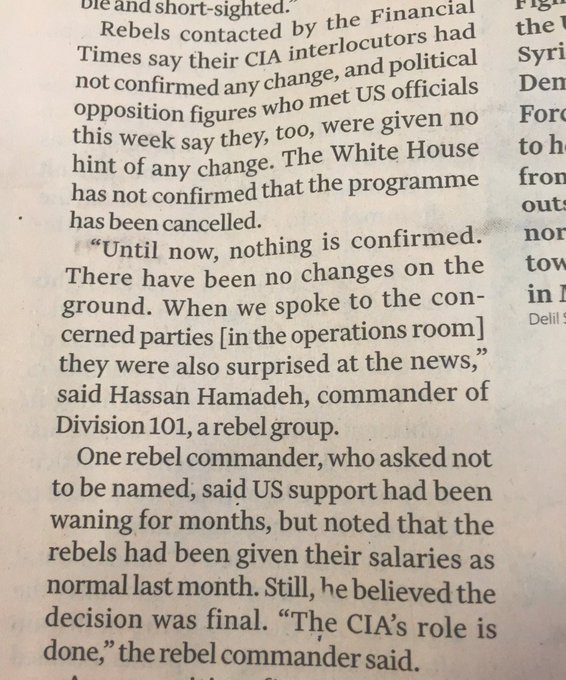 Financial Times: CIA not only armed Syrian “rebels” it is paying their monthly salaries pic.twitter.com/HX8ncle0mU

At the Aspen Security Forum on Thursday, CIA director Mike Pompeo said, “WikiLeaks will take down America any way they can and find any willing partner to achieve that end.”

Obviously strongly prefer normal democratic and constitutional politics. But if it comes to it, prefer the deep state to the Trump state.

It’s understandable Pompeo doesn’t want the CIA to be leaking like a sieve, but let’s look at some of these recent leakers.

• Bradley Manning leaked information on US war crimes in the neocon war in Iraq.

• Snowden leaked information on the US spying apparatus being used domestically against Americans rather than against foreigners as promised.

• Reality Winner was a stupid little girl who should have never been hired if the government still had basic standards and wasn’t more interested in hiring in the name of “diversity” rather than ability.

Very few young people have any sense of loyalty to our deep state because it doesn’t represent their interests. We’re not living in the America of the 1940’s and 1950’s where Americans were largely united in the fight against communism and were more than happy to execute leakers like Julius and Ethel Rosenberg.