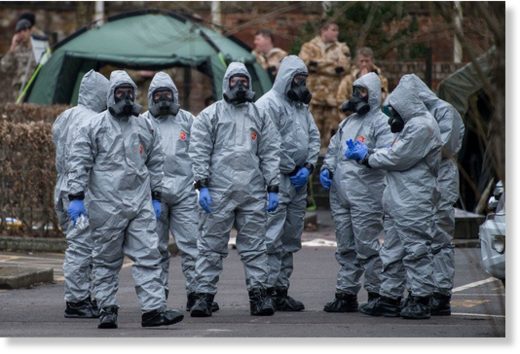 The anglo-American establishment hates Putin because he took the broken pieces of a Soviet Union that was supposed to be one more Western vassal state and fashioned them into a modern, sovereign Russian Federation capable of pushing back against the Western vision of a unipolar world, a Pax Americana at gunpoint.

In radically transforming and strengthening both the Russian economy (making it largely immune to various types of economic attacks) and the Russian military, Putin effectively robbed the global empire of its manifest destiny to rule the globe unchallenged. In response, the empire-builders set out to do whatever it takes to destroy Putin and modern Russia. Yet due to Putin’s expert moves on the global chessboard, the empire-builders find themselves with only one effective string to their collective bow with which to take Putin down: black propaganda and dirty tricks.

One example of this black propaganda campaign is the desperate attempts made by the US and its allies over the past 5 years to frame Russia (and Vladimir Putin personally) for carrying out chemical weapons attacks in different parts of Syria. On every occasion, Western governments and media failed to adequately convince Western populations that the allegations were accurate, or at least convince them that anything Putin was doing in Syria was worse than what they themselves were doing. Many people retain the ability to detect blatant BS when they smell it, apparently.

Recent allegations that Putin is responsible for the poisoning of former Russian GRU operative Sergei Skripal and his daughter in Salisbury, southern England, can be seen as a ‘plan b’ following the failed ‘chemical weapons in Syria’ smear attempt, whereby the same allegation is brought ‘closer to home’ and made more ‘personal’ for British people (and, by extension, European and American people). By creating the appearance that Putin used chemical weapons in sleepy Salisbury, the British government provides itself with lots of political capital to ‘justifiably’ increase the slander and threats towards the Russian government and distort the thinking of the average Brit.

In the minds of the character-disturbed freaks that haunt the backrooms of the British intelligence establishment, Skripal had outlived his usefulness as a double agent. At 66 years old and long-since out of the loop on events inside Russia, he had effectively retired to the UK when he was moved there by MI6 in 2010. That said, Skripal was undoubtedly still being watched by British spooks, not so much for what he could offer them, but for what might he offer the Russians should he ever have become a ‘triple agent’. He may also have worked in some capacity at the nearby military chemical weapons research facility at Porton Down, which manufactures similar types of nerve agents to those that he and his daughter are said to have succumbed to. But even if Skripal had no specific technical or intelligence value, the simple fact of his being a former Russian intelligence agent presented British intelligence with the opportunity to use him, one last time, on her majesty’s secret service.

That the immediate reaction of the British establishment to the news that Skripal and his daughter had been found unconscious on a park bench in Salisbury was to blame Russia and issue an ultimatum for Putin to ‘fess up’ – followed up today by the threat that RT UK will be taken off the air – is itself evidence that this was a pre-planned British operation to achieve specific goals. It is also evidence of just how much Western politicians see the alternative narrative presented by Russian media such as RT as a direct threat to their power and agenda.

Just as with the 9/11 attacks, when a government appears to have everything ‘ready to go’ within hours of an attack on their soil (a serious investigation be damned), any rational person should be suspicious of the dominant narrative.

Here are a few questions readers might like to ponder that open up the question of who poisoned Skripal and his daughter.

Why could a poison developed in the Soviet Union almost 30 years ago not be obtained or manufactured by covert Western operations in the time since?

Related to the above: one of the key manufacturing sites for the alleged poison – Novichok – was the Soviet State Scientific Research Institute for Organic Chemistry and Technology in Nukus, Uzbekistan. Since its independence in 1991, Uzbekistan has been working with the government of the United States to dismantle and decontaminate the sites where the Novichok agents and other chemical weapons were tested and developed. In 2002 the United States Department of Defense dismantled the major research and testing site for Novichok in Uzbekistan under a $6 million ‘Cooperative Threat Reduction’ program. Chemical agents like Novichok were also developed and likely stored in several other former Soviet Republics, including Ukraine.

If Russia really wanted to eliminate an aging double agent, why would they leave obvious fingerprints that trace back to them? In an era where someone can have any number of ‘accidents’ or even an artificially induced ‘heart attack’, surely there are ways for the Russians to bump someone off without outing themselves? I’m reminded here also of the alleged ‘Russian hackers’ of the DNC emails in 2016 who called themselves “fancy bear” and left clear trails back to Russia. How convenient.

The bottom line here is that the attempt on Skripal’s life is in the interest of Western intelligence agencies and governments as part of their vicious black propaganda campaign against Russia and its leader. When faced with complex and covert moves on the geopolitical chessboard in the era of high-tech Cold War part 2, ‘cui bono’ is still the best indicator of where to start looking for the culprits.

Joe Quinn is the co-author of 9/11: The Ultimate Truth (with Laura Knight-Jadczyk, 2006) and Manufactured Terror: The Boston Marathon Bombings, Sandy Hook, Aurora Shooting and Other False Flag Terror Attacks (with Niall Bradley, 2014), and the host of Sott.net’s The Sott Report Videos and co-host of the ‘Behind the Headlines’ radio show on the Sott Radio Network.

An established web-based essayist and print author, Quinn has been writing incisive editorials for Sott.net for over 10 years. His articles have appeared on many alternative news sites and he has been interviewed on several internet radio shows and has also appeared on Iranian Press TV. His articles can also be found on his personal blog JoeQuinn.net.