A six-year-old boy is held by his mother at a malnutrition intensive care unit at a hospital in Hodaida, Yemen. (Photo:Reuters)

Yemen is hemorrhaging. After more than three years of a brutal and genocidal war waged by a U.S/U.K-armed Saudi Coalition against 27 million Yemenis, life in Yemen has been reduced to a diseased, starving, mutilated and preyed upon nation that is still resisting some of the world’s most powerful nations in their attempts to drive Yemenis to their knees.

In May 2018, Sir Roger Carr, chairman of BAE, gave a speech to shareholders at the BAE AGM. “There is no doubt that 2017 was a successful year as reflected in our sales, profits and cash flow, which, I am pleased to say, has supported an increase in your dividend for the year to 21.8pence per share.”

Shareholders in arms production benefit from bloodshed globally. The deaths of Yemeni children pay “healthy” dividends. In 2015 the UK exported £ 2.94 billion in arms to Saudi Arabia over a period of 9 months. The illegal aggression against Yemen began in March 2015. BAE jumped at the opportunity to reap a harvest from the murder of Yemeni civilians. According to Amnesty International:

“They (UK) recently diverted a batch of 500-pound ‘Paveway IV’ bombs to Saudi Arabia. These bombs are used by Tornado and Typhoon fighter jets, both of which are manufactured and supplied to Saudi Arabia by the UK arms company BAE Systems.”

In May 2018 Carr said “our customers are our lifeblood” while those customers shed blood globally. Saudi Arabia is crucial to BAE’s success in the arms industry and is its third largest market sector after the U.S and U.K.

“According to the company’s own figures for 2015, the Saudi military market helped boost its overall performance. Sales increased by £1.3 billion to £17.9 bn.”

In 2016 Carr was questioned regarding the ethics of supplying arms to the Saudi regime. Carr dismissed such troublesome moral issues “We are not here to judge the way that other governments work, we are here to do a job under the rules and regulations we are given.”. The shareholder returns weigh more heavily upon the minds of war-vultures like Carr than the mass murder being committed with BAE weapons and equipment in Yemen by a despotic Saudi regime and human rights violator of world record proportions.

In 2016, BAE defended the sale of weapons to Saudi Arabia with a very familiar slogan “We provide defence equipment and support to the Kingdom of Saudi Arabia under a Government to Government agreement.”. The old self-defence canard, deployed so rigorously by the Zionist regime while it batters the concentration camp that is Gaza with chemical weapons and uses the Gazan people as lab rats for testing new armaments on behalf of firms like BAE.

In 2017, it was revealed that British arms companies had earned in excess of £ 6bn from trade with Saudi Arabia during the war of aggression waged against Yemen since March 2015. Profit extracted from the bombing of weddings, schools, hospitals, civilian infrastructure, blind schools, fishing villages and residential areas across Yemen – a bombing campaign that has created the breeding ground for cholera and other silent killers.

A Sanaa-based, Yemeni journalist and activist, Hussain Al-Bukhaiti was interviewed on RT Going Underground. Al-Bukhaiti holds the U.K and U.S government and private sector military industrial complex wholly responsible for the deaths of tens of thousands of civilians in Yemen since the illegal war began in 2015. 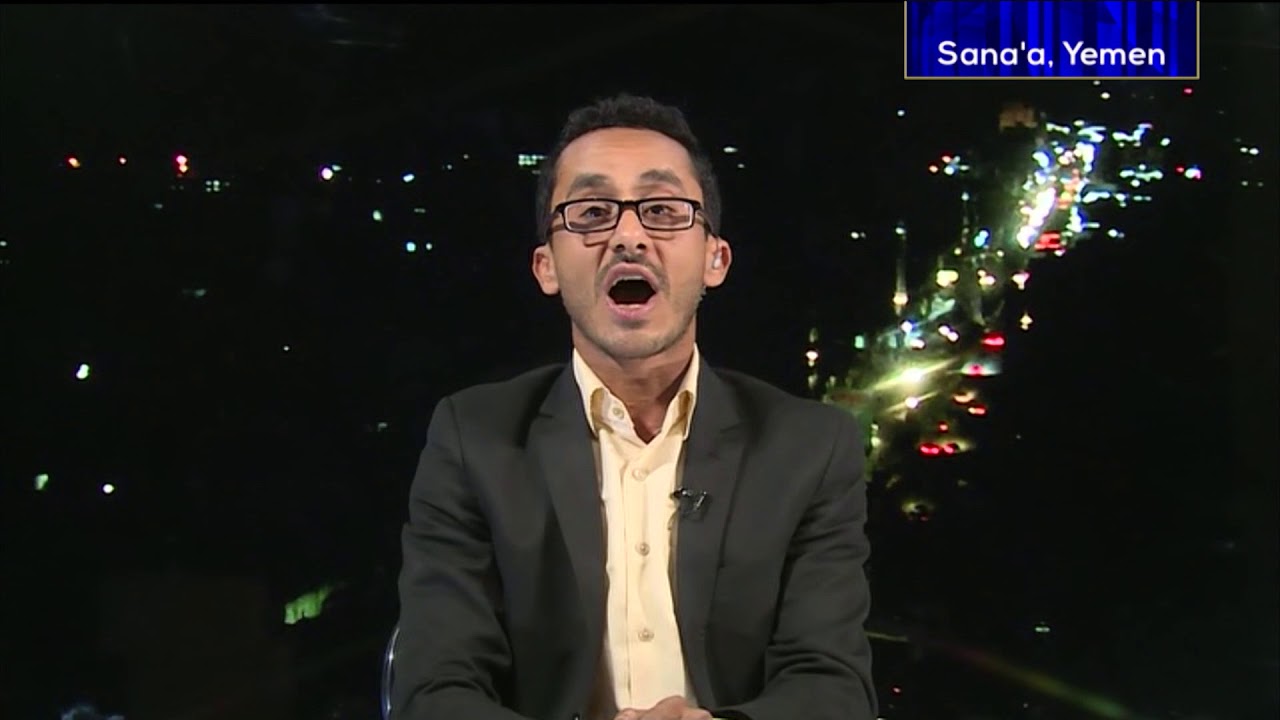 According to Carr  – “We (BAE) supply equipment government-to-government to enable the job to be done as seen fit. We separate ourselves from the war itself… we’re not involved in any part of prosecuting, planning or executing the war.” – this defies logic, if you knowingly hand the means to commit mass murder to a known psychopath, you are an accessory to the dreadful consequences Mr Carr. I will not call you “Sir”. 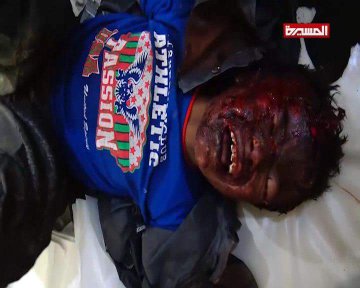 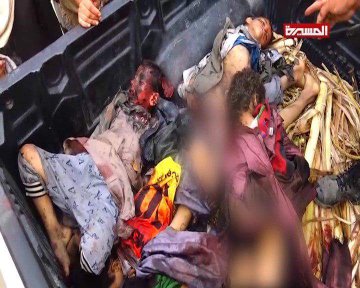 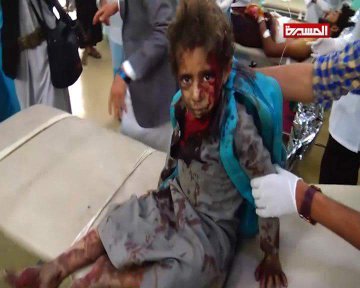 Graphics pictures
Death toll rises to 41 people and 55 injures in an attack by Saudi airstrikes on a school bus in Dhahian area of Saada in northern #Yemen.
A new massacre committed today days after the massacre of #Hodeidah‘s hospital and fish market.

A report in Drone Warfare pointed out that “While being repeatedly questioned about civilian deaths by supporters of the Campaign Against Arms Trade (CAAT), Sir Roger claimed that BAE Systems hoped for peace in Yemen and other countries, adding: “One death of anybody is one death too many.” There is no room for crocodile tears while you are patting yourself on the back for profit margins gained from the deaths of millions around the world. Carr’s rank hypocrisy was exposed when he later refused a minute’s silence to commemorate the innocent victims of his products worldwide.

#BREAKING NEWS#Saudi #UAE strikes targeted a school bus in Dhahiaan market in #Saada north #Yemen killing
39 people mostly schools students
40+ injurd
Number of casualties could go up as many are still uncountable
..
How many lives will take till #USA & #UK stop weapons supply! 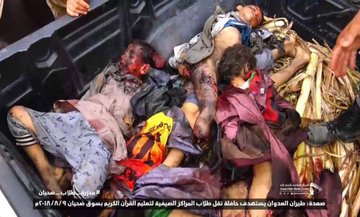 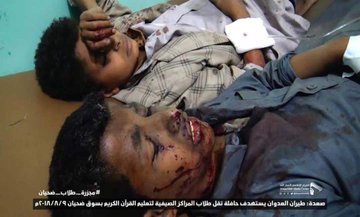 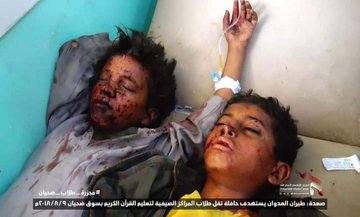 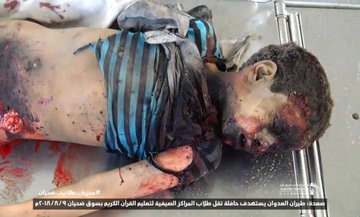 The self-defence slogan was unfurled again by Carr who claimed that the U.S/U.K-backed Saudi regime had the right to “protect itself” against “Houthi” cross border missile attacks. No mention of Yemen’s need to defend itself against the ravages of imperialist super-powers and their sophisticated weaponry being rained down upon the Yemeni people.

“We are not an aggressive company. We don’t conduct wars, we manufacture equipment in order to ensure that those who protect and serve us are equipped appropriately and hope that having given that equipment it will avoid others being aggressors.” was Carr’s plea for exoneration from international justice. When did Saudi Arabia serve and protect us exactly Mr Carr? When did Yemen aggress the U.K Mr Carr? Why not be truthful, why not admit you will supply arms to global terrorists if it expands your profit margins and maintains the cycle of perpetual war?

“The reason that BAE doesn’t know if its weapons were used in the bombing of the wedding in Yemen is because it doesn’t want to know. Its entire business model is based on perpetual war. To ask questions or to take any kind of moral stance would be to jeopardise its position as a major arms exporter.” ~ Andrew Smith of CAAT ( Campaign Against Arms Trade).

Theresa May, Philip May and BAE

At the 2018 BAE AGM, Carr stated that “our defence customers are approved by government and products are exported under strict regulations.”. How stringent are those “regulations”? How are they influenced and how are they enforced?

It is worth noting that among the U.K Prime Minister’s Business Ambassadors is former BAE executive, Sir Richard Olver who is PM’s Ambassador for “Manufacturing and Advanced Engineering”. This role includes:

Effectively one of the elite influencers attached to the PM’s office was a major player in the military supply sector and a promoter of BAE in particular.

Philip May is Theresa May’s husband. Philip May is also a “relationship manager” at an investment management company, Capital Group. According to CG “his job is to ensure the clients are happy with the service and that we understand their goals.” CG is the major shareholder in none other than BAE and the second largest shareholder in Lockheed Martin, also heavily invested in partnership with the Saudi regime and its campaign to wipe Yemen from the map.

It also cannot be coincidence that BAE profited handsomely from Theresa May’s unlawful aggression against Syria in April 2018 alongside the U.S and France. Based upon open source narratives provided primarily by the UK FCO-created and financed White Helmets, May’s government cobbled together a flimsy pretext to bomb alleged chemical facilities in Syria that had already been designated non-chemical-weapon manufacturing sites by the OPCW earlier in 2018.

£6.3m worth of BAE missiles were fired in Syria. May’s husband’s company, Capital Group is the largest shareholder in BAE

“It has been reported that the UK’s contribution to military strikes was to fire eight ‘Storm-Shadow’ missiles at an alleged chemical weapons facility, each of which cost £790,000 ($1.13 million) – totaling £6.32 million ($9 million). The missiles were manufactured by BAE Systems.” ~ Market Screener report.

Did Philip May relationship manage consent for that illegal strike and its subsequent financial benefits for BAE?

The Tory Government connections to BAE don’t end with Philip May. George Osborne, former Chancellor of the Exchequer, current editor-in-chief at the Evening Standard, also works as a consultant for Blackrock Investment Institute. Blackrock has substantial shares in BAE. Since February 2017, Osborne has secured £ 162, 500 per quarter, plus equity as the “adviser on the global economy to Blackrock”.

These war-brokers and conflict-investment cartels will not spare a thought for lives thousands of miles away in a poverty stricken corner of the world that represents nothing more to them than attractive salaries and shareholder perks. The moral bankruptcy of these military industrial structures defines description when they can survey the broken bones and emaciated corpses of children, the birdlike skulls and protruding eyes of human beings clinging to life, without sustenance and they can super-impose balance sheets and project forward to the next killing field.

“When this campaign started, one thing that was significant but went unnoticed is that the Yemenis were close to a deal that would institute power sharing with all sides, including the Houthis”

In July 2015, a young Yemeni mother who had fled the Saudi bombing with her 8-year old daughter, told me that:

“Yemeni people are not bad people, they are good people.  They want to be respected, they want their sovereignty to be respected.  We did not wage a war, a war was brought upon us.  Our issue was an internal one and it would have been sorted out internally.”

In 2016, International Law Professor, Francis Boyle made the statement that:

“The UN embargo/blockade against Yemen and the Yemenis violates Genocide Convention article II (e):  Deliberately inflicting on the group, conditions of life calculated to bring about its physical destruction in whole or in part.” ~ Prof. Francis A Boyle

None of these contextual factors are of any consequence to the providers of justification for war, the Tory Government minute-men who ensure the arms industrial sector is nurtured by the prospect and reality of perpetual conflict in as many arenas as possible. Death, destruction, starvation, human misery is viewed as nothing more than “collateral damage”, a forgotten and ignored corollary of their drive to world dominance and supremacy.

When the world is eventually laid waste and entire peoples eradicated, what will the machine do, will it turn upon itself and its own people to keep the shareholders happy? Yemen, Syria and all those who resist this machine and its inner workings, stand between us and the rapacious ambitions of the murderers in our midst, we should never forget this simple equation – we just might be next.

“Every gun that is made, every warship launched, every rocket fired signifies in the final sense, a theft from those who hunger and are not fed, those who are cold and are not clothed. This world in arms is not spending money alone. It is spending the sweat of its laborers, the genius of its scientists, the hopes of its children. This is not a way of life at all in any true sense. Under the clouds of war, it is humanity hanging on a cross of iron.” ~ Dwight D. Eisenhower.

Vanessa Beeley is an independent journalist, peace activist, photographer and associate editor at 21st Century Wire. Vanessa was a finalist for one of the most prestigious journalism awards – the 2017 Martha Gellhorn Prize for Journalism – whose winners have included the likes of Robert Parry in 2017, Patrick Cockburn, Robert Fisk, Nick Davies and the Bureau for Investigative Journalism team. Please support Vanessa at her Patreon account.