Russia’s Defence Ministry has published dramatic video Tuesday showing another close encounter between its military planes and NATO jets over the Baltic Sea, but this time it involved a dangerous intercept as the NATO aircraft came just off the wing of a large passenger plane carrying Defence Minister Sergei Shoigu.

A TASS news agency correspondent aboard Defence Minister Shoigu’s plane captured the moment when a pair of Russian Su-27 escorts drove off the NATO F-18 aircraft in what is the most serious incident in the neutral skies over the Baltic to date.

A Russian Su-27 jet propels an F/A-18 Hornet fighter jet away from the aircraft of Russian Defence Minister Sergei Shoigu in the sky over the Baltic Sea.#Russia #USA #Baltic 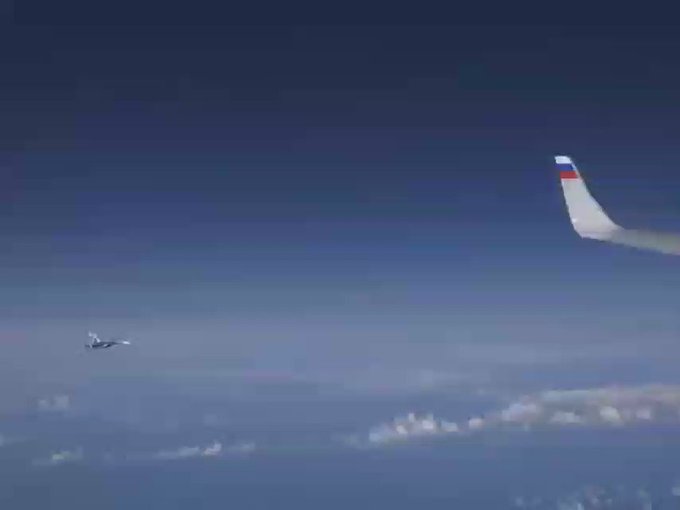 TASS describes the incident as follows (based on rush translation):

The plane carrying Shoigu was accompanied by an escort of two fighter aircraft of the Baltic Fleet Su-27 as it went from Kaliningrad to Moscow.

Above the neutral waters of the Baltic, the NATO F-18 aircraft tried to approach the defense minister’s plane, but the Russian pilots pushed the fighter out, not allowing it to come close to the liner.

One of the Russian Su-27’s can be seen banking hard into the NATO F-18, after which the F-18 continues its path away from the defense minister’s plane.

Note to readers: please click the share buttons above or below. Forward this article to your email lists. Crosspost on your blog site, internet forums. etc.

Featured image is from Zero Hedge

Threatening Russia: NATO Fighter Jets Can Patrol “Anything They Want”
The original source of this article is Zero Hedge