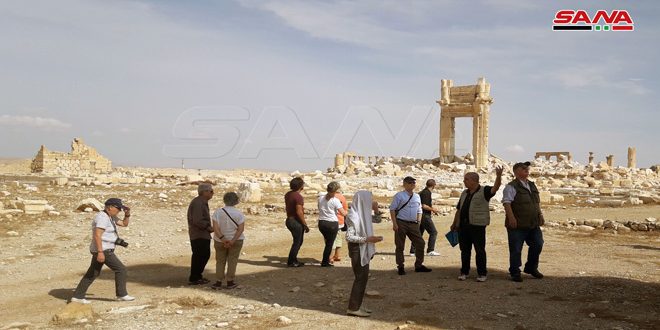 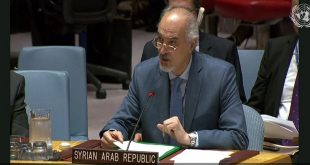 Al-Jaafari: restoration of occupied Syrian Golan will remain a priority for Syria

Palmyra, SANA- A French tourist group visited the historical city of Palmyra and check out the destruction which the city has suffered due to the  crimes of  Daesh (ISIS) terrorist organisation against the history and the civilisation of this ancient city.

Michelle Anka, a retired pharmacist, one of  the French tourist group told SANA “This is my third visit to Syria after the war. This country has great historical heritage.”

Anka added “ I feel very sorry that the government of my country (France) has a hand in the suffering of the Syrian People who have difficulties in managing their daily life due to terrorism”.

“In every visit to Syria I feel the courage of the Syrian People through their insistence on rebuilding what has been destroyed at the hands of Terrorist groups.” Anka said

The tourist Martin Charel, a lawyer, in her turn said that their visit to Syria aims to get acquainted with the real situation in this country which enjoys safety and stability, contrary to what Some Western media is trying to promote.

“I was very moved after seeing the brutal destruction of the archaeological monuments sites in Palmyra by terrorists  ISIS,” she added.

Palmyra’s residential and archaeological city is witnessing a steady return to natural life  and tourism due to the state of security and safety experienced by the area after clearing the city  from terrorism and as a result of the relentless efforts exerted by the authorities concerned in Homs province to complete the rehabilitation of infrastructure and services and to provide all requirements for restoring the elegance of this global tourist destination.