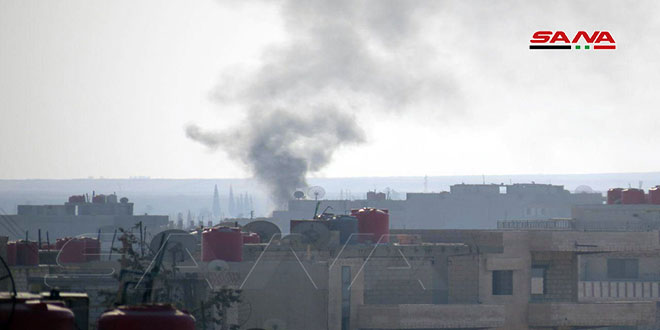 Damascus, SANA- President of the Turkish regime Recep Tayyip Erdogan has continued to suppress his opponents as in every stage, he uses a new flimsy pretext in his policy starting from the alleged coup in Turkey in 2016 when he launched a wide and overt crackdown on those who criticise his policies, and recently he has started to arrest whoever dares to reject his blatant offensive on the Syrian territory.

Intensive campaigns have been launched by Erdogan’s authorities against his critics and opponents since the beginning of the Turkish aggression on the Syrian territory.

The Washington Post newspaper mentioned that Erdogan has exploited his aggression against Syria to weaken the internal opposition and to suppress the voices of those who criticize that aggression in order to enhance his authority.

The US newspaper affirmed in an article by journalist Can Dündar that Erdogan has exploited the aggression against the Syrian territories as a pretext to tighten the noose on his opponents, particularly after the losses inflicted on his party “Justice and Development” in the latest local elections which were held last April.

The newspaper indicated that Erdogan is trying to benefit from the atmosphere of fear and division which he sows in the hearts of those who oppose his policies.

The Washington Post indicated that the authorities of the Turkish regime have arrested more than 150 persons since the beginning of the aggression on the Syrian territory, adding that the opposition members who are outside Turkey haven’t escaped the revenge of Erdogan as they have been arrested immediately after returning to their country just for using the word “aggression” or “war” on their pages on the social networking website “Facebook”.

Over the three years after the attempt of the coup, Erdogan launched a large-scale crackdown as more than 77 thousands of his opponents have been arrested and about 150 thousand workers have been fired from their jobs at governmental institutions.

on Oct. 9th, Erdogan and his mercenaries started an offensive in Syria in the countryside of Hasaka and Raqqa claiming the lives of tens of civilians and injuring others, in addition to causing the displacement of tens of thousands of people and a huge material damage to the infrastructure.