A DC foreign-policy apparatchik who oversaw Congress’ Syria Study Group proclaimed that the US military “owned” one-third of Syrian territory, including its “economic powerhouse,” then outlined a sadistic strategy for preventing reconstruction of the “rubble.”

Despite President Donald Trump’s order of a partial withdrawal of troops from Syria, the United States’ regime-change war against the country continues in broad daylight.

At a US government-funded think tank at the forefront of shaping Washington’s interventionist designs, an American official succinctly laid out the continued-regime change strategy.

Dana Stroul, a longtime US diplomat who oversaw a congressionally mandated study of Syria, outlined the four-pronged plan for what she called the “new phase” of the war:

It is beyond debate that this approach will lead to massive suffering, privation, and even the deaths of masses of Syrian. But when Stroul presented it before a panel, the potential impact on civilians was was not even mentioned once.

This disturbing plan was articulated on October 31 at the Center for Strategic and International Studies (CSIS), a militaristic think tank funded by the US government and its allies, along with the arms industry, fossil fuel corporations, and banks. In April, The Grayzone’s Max Blumenthal exposed a secret meeting at CSIS where US and Latin American officials mulled a military invasion of Venezuela. Though it was open to the public, the think tank’s recent meeting on Syria was no less militaristic.

Titled “Syria in the Gray Zone,” the panel featured the two co-chairs of the Syria Study Group, a bi-partisan working group appointed by Congress to draft a new US war plan for Syria. One co-chair was chosen to represent the Republican Party, and the other to represent the Democratic Party, but both marched in lockstep agreement in support of continued war on Syria, and their views were virtually indistinguishable.

Both of the congressionally appointed co-chairs also happen to work at the Washington Institute for Near East Policy (WINEP), a pro-Israel think tank that grew out of the AIPAC lobbying juggernaut. Their Syria Study Group was a collection of hardline interventionists from pro-Israel and Gulf monarchy-funded DC think tanks, as well as Mark Kirk, the former Republican senator who was one of the all-time greatest recipients of funding from Israel lobbying outfits.

Dana Stroul, the Democratic co-chair of the Syria Study Group, is a longtime US government operative who has spent years drafting Middle East policy. While serving on the Senate Foreign Relations Committee, she oversaw US weapons sales and foreign aid for the State Department and Washington’s soft-power arm, the US Agency for International Development (USAID).

In her speech at CSIS, Stroul sketched out the ongoing regime-change strategy, summarising the points made in the Syria Study Group final report in September.

At a US gov-funded think tank, this official who oversaw Congress’ Syria Study Group outlines the continued regime-change strategy.

She says the US military “owned” 1/3rd of Syrian territory, including its oil/wheat-rich region. And the US is trying to block reconstruction funds 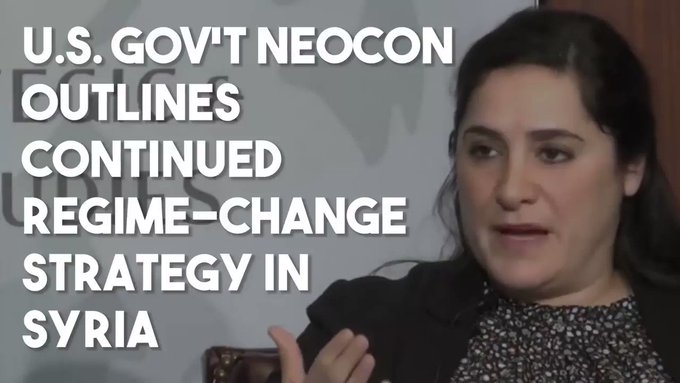 US military ‘owns’ one-third of Syria, ‘the rest is rubble’

Dana Stroul reluctantly acknowledged that “there’s limited appetite domestically here” for more US intervention in Syria. But she noted that the American regime-change war is far from over.

Resorting to classically colonial rhetoric, Stroul casually noted that “one-third of Syrian territory was owned via the US military, with its local partner the Syrian Democratic Forces.”

She made it a point to stress that this sovereign Syrian land “owned” by Washington also happened to be “resource-rich,” the “economic powerhouse of Syria, so where the hydrocarbons are… as well as the agricultural powerhouse.”

Neocolonial-style military occupation occupation was to be complimented by a political siege of the Syrian government, Stroul explained.

She then advised ramping up of the “economic sanctions architecture.”

Finally, Stroul proposed leveraging reconstruction aid as a tool against the Syrian government.

Noting that the US government’s humanitarian aid and “stabilisation assistance” for Syria has gone to its ally, the Kurdish-led Syrian Democratic Forces (SDF) in the northeast, Stroul urged the US to keep the rest of the country in ruins until it achieved its goal of regime change.

“The rest of Syria though is rubble,” Stroul stated. “And what the Russians want and what Assad wants is economic reconstruction. And that is something that the United States can basically hold a card on, via the international financial institutions and our cooperation with the Europeans.”

Emphasizing that Washington’s goal in has been to block reconstruction by Damascus, Stroul insisted, “We should hold a line on preventing reconstruction aid and technical expertise from going back into Syria.”

‘The conflict is not over; it’s entering a new phase’

In October, Trump ordered a partial withdrawal of US troops from northeastern Syria, inspiring a chorus of outrage in official Washington. He ultimately left hundreds of soldiers to occupy Syria’s oil and gas-rich region, to starve the Syrian government of funding needed for reconstruction efforts.

“We’re keeping the oil. I’ve always said that – keep the oil,” Trump explained. “We may have to fight for the oil. It’s ok. Maybe somebody else wants the oil, in which case they have a hell of a fight. But there’s massive amounts of oil.”

Trump added, “We should be able to take some also, and what I intend to do, perhaps, is make a deal with an ExxonMobil or one of our great companies to go in there and do it properly.”

At the CSIS panel, Dana Stroul argued that even with the US military presence in flux, “the other forms of leverage remain compelling.”

“If we’re going to hold the line on the diplomatic isolation, on moving forward with the economic sanctions architecture, and holding the line on reconstruction aid, perhaps those things could still be compelling,” she said.

“Because in our view, what our assessment was was that the conflict has not changed; the conflict is not over; it’s entering a new phase,” Stroul added.

The Republican co-chair of the Syria Study Group Michael Singh, who is also a fellow at the pro-Israel WINEP think tank, echoed Stroul’s argument. “We still have leverage,” he said. Although Trump’s proposed withdrawal has weakened it.

“I’ve been critical the decision to withdraw; I think it was the wrong decision,” Singh explained. “But I think that case can be overstated. I don’t think that Russia, the Assad regime, Iran, now have sort of an easy path to victory, or even an easy path to consolidating control, whether in northeast Syria or elsewhere.”

To quote Trump, “We’re keeping the oil… We may have to fight for the oil. It’s ok. Maybe somebody else wants the oil, in which case they have a hell of a fight.” 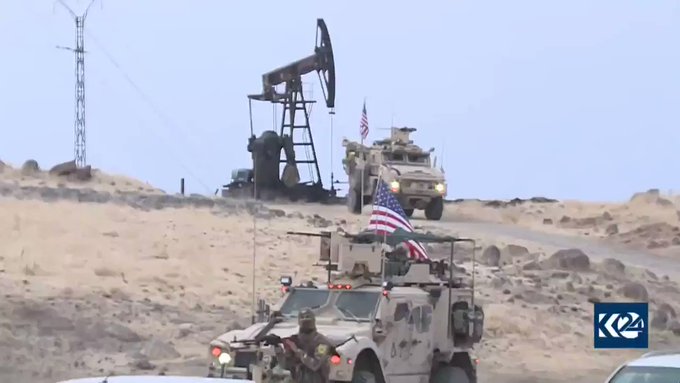 A transcript of Stroul’s comments at the CSIS panel follows below:

“We argued in our recommendation section that, taken as a whole, even though in the United States, there’s limited appetite domestically here or on the hill to match the level of resources or even diplomatic investment of the Iranians and the Russians in Syria, that the United States still had compelling forms of leverage on the table to shape an outcome that was more conducive and protective of US interests.

And we identified four. So the first one was the one-third of Syrian territory that was owned via the US military, with its local partner the Syrian Democratic Forces. Now this was a light footprint on the US military, only about a thousand troops over the course of the Syria Study Group’s report, and then the tens of thousands of forces, both Kurdish and Arab, under the Syrian Democratic Forces.

And that one-third of Syria is the resource-rich, it’s the economic powerhouse of Syria, so where the hydrocarbons are, which obviously is very much in the public debate here in Washington these days, as well as the agricultural powerhouse.

But we argued that it wasn’t just about this one-third of Syrian territory that the US military and our military presence owned, both to fight ISIS and also as leverage for affecting the the overall political process for the broader Syrian conflict. There were three other areas of leverage.

Two is the economic sanctions architecture. So some of this is part of the maximum-pressure campaign of the Trump administration on Iran, but there’s a whole suite of both executive and congressional sanctions on Syria and Bashar al-Assad, both for human rights abuses in Syria and to the backers of Assad for their activities in support of him in Syria.

And three was reconstruction aid. So the United States remains the overall largest single donor of humanitarian aid to Syrians both inside Syria and refugees outside of Syria. And there was some stabilization assistance in the part of Syria that was liberated from ISIS and controlled via the Syrian Democratic Forces in northern-eastern Syria.

The rest of Syria though is rubble. And what the Russians want and what Assad wants is economic reconstruction. And that is something that the United States can basically hold a card on, via the international financial institutions and our cooperation with the Europeans.

So we argued that absent behavioral changes by the Assad regime, we should hold a line on preventing reconstruction aid and technical expertise from going back into Syria.

So now in the past month it looked like one of the most compelling forms of leverage, which was this US military presence, was taken off the table quite fast. Now … the news suggests that maybe that military presence will stay for some period of time.

And the problem with this is no matter what the US military presence is or isn’t, at this point a lot of the the PR damage is done. So if you’re trying to get allies and partners in Europe or otherwise to work with our US military in completing the fight against ISIS, most countries are going to be unwilling or hesitant to contribute more than they already have, because they can’t plan on the United States. Because this is like the third time that decisions have come out of Washington in a rather unplanned manner about whether or not the US military is staying.

Mike and I have argued recently that the other forms of leverage remain compelling, if resourced effectively and prioritised at the highest levels of the US government.

So if we’re going to hold the line on the diplomatic isolation, on moving forward with the economic sanctions architecture, and holding the line on reconstruction aid, perhaps those things could still be compelling, because in our view, what our assessment was was that the conflict has not changed; the conflict is not over; it’s entering a new phase.”