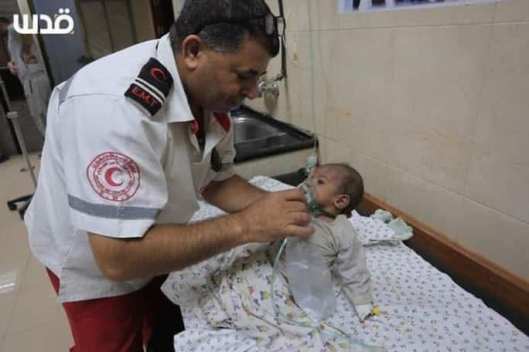 Last night the Israeli occupation forces warplanes wiped out an entire house in besieged Gaza claiming they were fighting “terrorism”.

A family of 8 was butchered.

This newborn baby was the only survivor of the horrific massacre that claimed the lives of her parents and siblings.

Since Tuesday the Israeli warplanes have been bombing residential buildings throughout Gaza in retaliation to the Palestinian Resistance’s rightful response to an Israeli assassination against one the resistance leaders.

So far nearly 35 Palestinians were killed and hundreds were injured. Many of whom are children and women. The youngest was a 6 month old baby!

The Palestinian resistance successfully shelled illegal zionist colonies around besieged Gaza and their rockets have reached areas in occupied Jerusalem and Tel Aviv.