Recep Tayyip Erdogan’s decision to get involved had disastrous consequences 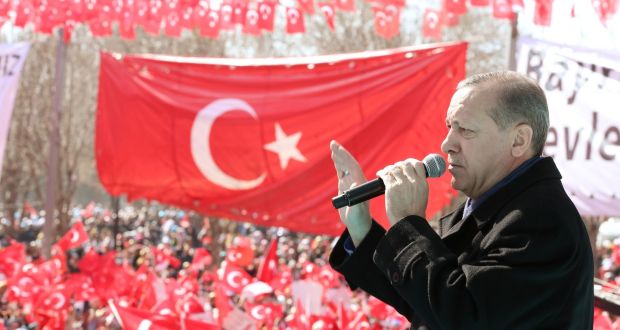 Turkey’s President Recep Tayyip Erdogan: If he had not intervened Syria would have emerged with a limited number of victims, little damage, few internally displaced and fewer refugees. Turkey, Lebanon and Jordan would also have escaped the negative human, economic and political impacts of the war across their borders.

Syria would have escaped more than eight years of warfare if Turkey had not intervened militarily and politically when Arab Spring anti-government protests erupted in March 2011. Without Turkey’s early involvement, Damascus’s crackdown would have ended the protests and the government would have initiated promised reforms.

Syria would have emerged with a limited number of victims, little damage, few internally displaced and fewer refugees. Turkey, Lebanon and Jordan would have escaped the negative human, economic and political impacts of the war across their borders.

While Turkey was not the only external power to intervene it was the first, the most prominent and provided access to others. The result was civil conflict and proxy wars that have drawn in the US, Europe, Russia, Iran, Saudi Arabia and the Gulf states.

As Islamic State expanded its holdings in Syria and established the capital of its “caliphate” at Raqqa, reinforcements, funds, and supplies flowed into this area from Turkey

Ergodan’s intervention began in May 2011, two months after protests erupted in Syria. He convened a meeting in Istanbul of Syrian opposition factions to discuss how to effect regime change. In July, Turkey started recruiting Syrian army deserters for the Syrian Free Army (FSA) with the aim of using force to topple Assad who, Ankara believed would “fall within weeks”.

In November, Erdogan called for sanctions to be imposed on Syria for its suppression of popular protests. “I believe the Syrian people will be successful in their glorious resistance,” he stated.

Turkish-trained and armed FSA factions clashed with Syria’s regular army and seized control of several towns around Damascus and its suburbs. Turkey also funnelled thousands of foreign jihadis into Syria. A fraction were recruited by al-Qaeda’s Jabhat al-Nusra, which entered Syria from Iraq in 2012, while 80 per cent joined Islamic State (originally Isis), a rival al-Qaeda offshoot established in 2013, and other jihadi groups.

As Islamic State expanded its holdings in Syria and established the capital of its “caliphate” at Raqqa, reinforcements, funds, and supplies flowed into this area from Turkey. Looted factory equipment from Aleppo and oil from captured Syrian fields were sold in Turkey.

The US and Europe began to roll back the “caliphate” only in 2014, when Islamic State swept into western Iraq, captured Mosul, and established a cross-border entity that attracted thousands of jihadi volunteers and their families. Until that time, the western powers did nothing to prevent al-Qaeda affiliates from taking over efforts to oust Assad because his removal was their main objective.

Turkey had other objectives as well. Protracted unrest has enabled Ankara to achieve territorial ambitions in Syria, a province of the Ottoman Empire until the first World War. Between August 2016 and March 2017 the Turkish army and surrogate Syrian militias belatedly joined the campaign against Islamic State and occupied strategic border towns in north-central Syria. Turkey also used the anti-Islamic State campaign as cover to attack US-backed Kurds fighting the jihadis.

In early 2018, Turkey invaded and occupied Syria’s Kurdish-majority district of Afrin. Following an agreement with Russia to establish a ceasefire in Syria’s al-Qaeda held Idlib province, Turkey established 12 large military bases to deter an offensive by Syrian government forces. This autumn, Ankara occupied a 120km long, 30km-wide strip on the Syrian side of the border with Turkey.

External intervention has had serious unintended consequences. Some 370,000 Syrians have been slain during the war, six million have fled Syria and six million have been displaced within the country. Assad’s enemies have failed to oust him and the Syrian army and its Russian and pro-Iranian allies have clawed back most of the territory seized by insurgents.

Moscow and Tehran have become entrenched in Syria and have strengthened their influence in the region. The war has wreaked destruction in large areas of the country and spilled over into Iraq and Lebanon.

Having initially welcomed Syrians fleeing the war, Turkey now wants to get rid of 3.5 million refugees who are a burden on the country’s faltering economy and unpopular with Turks.

Turkey intends to settle refugees in areas it occupies in northern Syria but this involves the ethnic cleansing of local Kurds. Armed Kurds have resisted displacement while the Syrian government has vowed to regain all Syrian territory.

During 2014-15 tens of thousands of Syrian refugees travelled through Turkey to Europe, creating fear of migrants and strengthening anti-migrant parties. Ergodan has blackmailed the EU into providing $6 billion to Turkey to house refugees in camps and prevent them from transiting to Europe.

He claims Turkey has spent $36.5 billion on refugees and threatens flood Europe with them if it does not do his bidding. More than 70,000 Islamic State women and children and 12,000 suspected fighters, 4,000 of them foreigners, are being held in northern Syria by US-supported Kurds who are under Turkish attack. No one wants them to return home.

Michael Jansen is the Middle East analyst for The Irish Times