B’Tselem: At least 19 Palestinians have lost an eye from Israeli fire during Gaza protests 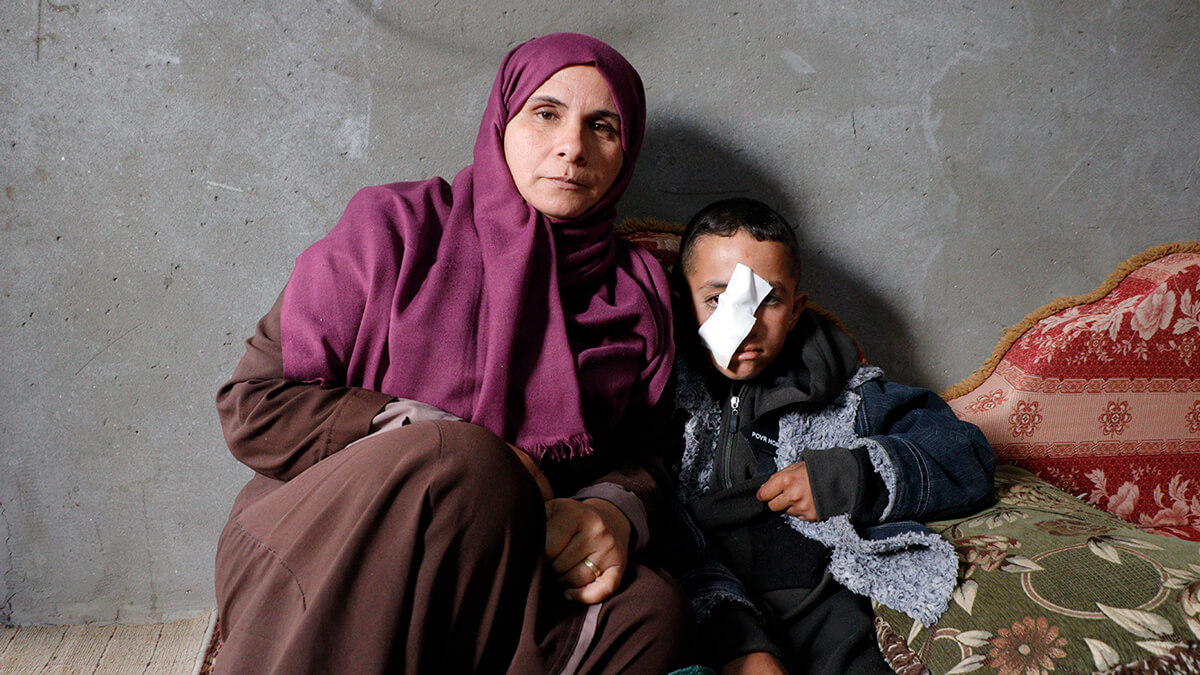 Since the Great March of Return began in Gaza two years ago, an estimated 19 Palestinians have lost an eye as a result of Israeli fire, Israeli human rights group B’Tselem said in a new report this week.

B’Tselem collected testimony from three Palestinians who were injured in their eyes during the Great March of Return in order to highlight Israel’s use of “crowd control” measures as lethal weapons.

The report details the cases of a 20-year-old young woman named Mai Abu Rawida, 10-year-old boy Muhammad Abu Raidah, and 28-year-old Saed Mahani, who all  lost one of their eyes after being shot by Israeli forces in the face with “crowd dispersal” measures.

In the case of Rawida and Mahani, both were shot in the eye with rubber-coated steel bullets, which can be lethal if fired from a close range. In Rawida’s case, she told B’Tselem that she had approached the border fence with Israel during protests, and was holding up a Palesitnian flag when she was shot.

According to B’Tselem, 10-year-old Abu Raidah was near the border fence in the southern Gaza Strip on December 27, 2019, collecting metal scraps for sale when he was hit in the face with a tear gas canister.

“At home, after he was released from the hospital, Muhammad grew very quiet,” th eboy’s mother, Jihan, told B’Tselem. “Before the injury, he was very active, he was the driving force in the house. He would go out every day to sell vegetables and pieces of metal and aluminum to bring in some money.”

“Muhammad still has strong pain in the spot where he was injured, as well as headaches and dizziness,” the testimony said, adding that he can only see through his left eye.

In all three cases, the injured Gazans expressed a need to be transferred out of the besieged enclave in order to receive further treatment and surgical care. Both Rawida and Mahani expressed that their only chance of getting a prosthetic eye replacement was outside of Gaza.

“The ordeal suffered by the wounded, who have to receive treatment and rehabilitation in the Gaza Strip while better care is available elsewhere, is yet another horrifying facet of Israel’s callous policy towards the residents of Gaza,” the group said.

According to B’Tselem, in addition to the 19 Gazans who lost sight in one eye, two more Gazans lost both their eyes after being shot with crowd dispersal weapons by Israeli forces.

“The use of crowd control measures as lethal weapons, which may result in death or serious injury, has been a feature of Israel’s open-fire policy regarding the demonstrations along the Gaza perimeter fence for nearly two years,” B’Tselem said in the report.

The group called the policy “illegal” and “immoral,” saying it “conveys disregard for the lives and bodily integrity of Palestinians.”

“So long as Israel persists in implementing it despite the horrific outcomes, demonstrators will continue to be killed and seriously injured.

According to B’Tselem, more than 200 Palestinians have been killed since the protests began on March 31, 2017.