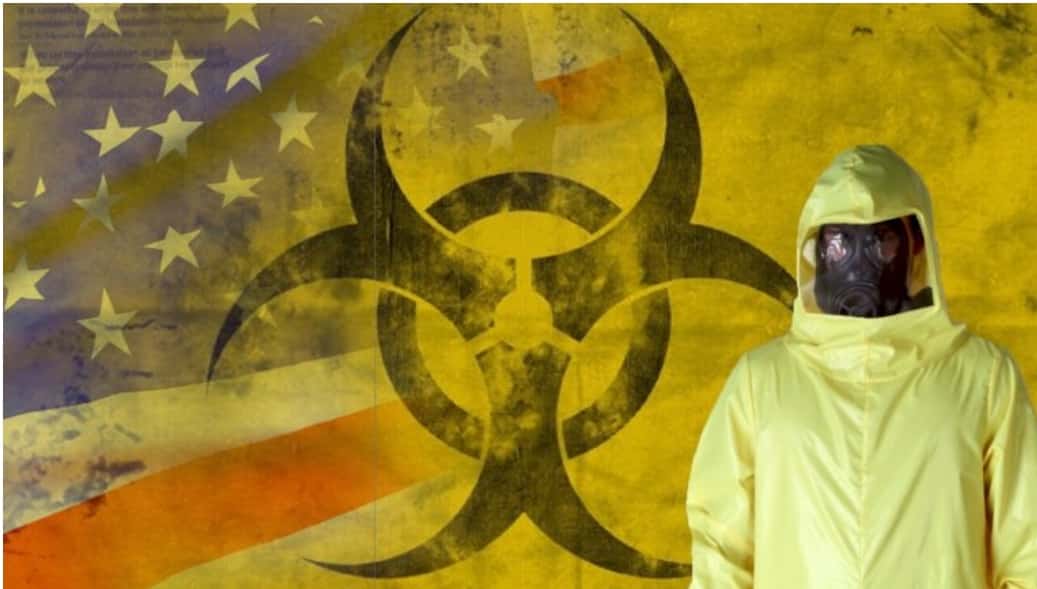 The American economy has been shut down by foolish government orders, and the insights of Mises and Rothbard tell us that complete collapse is only a matter of time. In an earlier column, I warned that the Deep State might seek to start a war with China to divert attention from our domestic mess. As I warned last month, “Because the epidemic started in China and spread from there, hostility toward Chinese people living in the US has gone up. Chinese-owned stores have been threatened, and gun sales to Chinese who fear attacks have soared. Chinese restaurants have few takeout customers.

“The President’s talk about the ‘Chinese virus’ fans the flame of ill-feelings, and some fear that the government may provoke a war with China in order to distract attention from a tanking US economy. US government propaganda has spread false claims about predatory Chinese trade practices to get the American people ready for hostile action toward China.”

Here’s an excellent in-depth analysis of Ron Unz’s recent bombshell article which argues that COVID is a biowar attack by Neocons in the US government against China, from the FTN podcast. See the full article and transcript here.

Unfortunately, things have gotten much worse since last month. America continues its policies of naval confrontation in the South China Sea; there are threats to sue China for damage caused by the coronavirus; and President Trump has threatened to pursue payment on long-defunct Chinese bonds in order to bankrupt the Chinese economy. Our disastrous trade war with China continues.

But today I want to focus on something even more sinister. There is good reason to believe that the coronavirus epidemic is part of an American biological warfare campaign against China and Iran. The brilliant physicist Ron Unz, who has time and time again been proved right by events, makes this case in a scintillating analysis.

Unz notes that “ Shortly before the coronavirus outbreak in Wuhan, that city had hosted 300 visiting American military officers, who came to participate in the 2019 Military World Games, an absolutely remarkable coincidence of timing. As I pointed out at the time, how would Americans react if 300 Chinese military officers had paid an extended visit to Chicago, and soon afterward a mysterious and deadly epidemic had suddenly broken out in that city?. . .

“Scientific investigation of the coronavirus had already pointed to its origins in a bat virus, leading to widespread media speculation that bats sold as food in the Wuhan open markets had been the original disease vector. Meanwhile, the orchestrated waves of anti-China accusations had emphasized Chinese laboratory research on that same viral source. But we soon published a lengthy article by investigative journalist Whitney Webb providing copious evidence of America’s own enormous biowarfare research efforts, which had similarly focused for years on bat viruses.”

Unz adds a number of items that lend cogency to his analysis. First, this is by no means the first suspicious biological attack on China. “During the previous two years, the Chinese economy had already suffered serious blows from other mysterious new diseases, although these had targeted farm animals rather than people. During 2018 a new Avian Flu virus had swept the country, eliminating large portions of China’s poultry industry, and during 2019 the Swine Flu viral epidemic had devastated China’s pig farms, destroying 40% of the nation’s primary domestic source of meat, with widespread claims that the latter disease was being spread by mysterious small drones. My morning newspapers had hardly ignored these important business stories, noting that the sudden collapse of much of China’s domestic food production might prove a huge boon to American farm exports at the height of our trade conflict.  . . So for three years in a row, China had been severely impacted by strange new viral diseases, though only the most recent had been deadly to humans. This evidence was merely circumstantial, but the pattern seemed highly suspicious.”

In order to deflect attention from its own activities, the US government has hinted the virus came from a biological laboratory in Wuhan, but it is hardly likely that the Chinese government would inflict a damaging disease on its own people. “It’s a classic propaganda tool for the US government to deflect attention from its own activities by accusing the enemy of ‘starting it.” Unz says, “Despite America’s growing economic conflict with China over the last couple of years, I had never considered the possibility that matters might take a military turn. The Chinese had long ago deployed advanced intermediate range missiles that many believed could easily sink our carriers in the region, and they had also generally improved their conventional military deterrent. Moreover, China was on quite good terms with Russia, which itself had been the target of intense American hostility for several years; and Russia’s new suite of revolutionary hypersonic missiles had drastically reduced any American strategic advantage. Thus, a conventional war against China seemed an absolutely hopeless undertaking, while China’s outstanding businessmen and engineers were steadily gaining ground against America’s decaying and heavily-financialized economic system.

“Under these difficult circumstances, an American biowarfare attack against China might have seemed the only remaining card to play in hopes of maintaining American supremacy. Plausible deniability would minimize the risk of any direct Chinese retaliation, and if successful, the terrible blow inflicted to China’s economy would set it back for many years, perhaps even destabilizing its social and political system. Using alternative media to immediately promote theories that the coronavirus outbreak was the result of a leak from a Chinese biowarfare lab was a natural means of preempting any later Chinese accusations along similar lines, thereby allowing America to win the international propaganda war before China had even begun to play.”

Unz points to another significant fact. After China, the next country to suffer from the virus was Iran, America’s main target in the Middle East. “As the coronavirus gradually began to spread beyond China’s own borders, another development occurred that greatly multiplied my suspicions. Most of these early cases had occurred exactly where one might expect, among the East Asian countries bordering China. But by late February Iran had become the second epicenter of the global outbreak. Even more surprisingly, its political elites had been especially hard-hit, with a full 10% of the entire Iranian parliament soon infected and at least a dozen of its officials and politicians dying of the disease, including some who were quite senior. Indeed, Neocon activists on Twitter began gleefully noting that their hatred Iranian enemies were now dropping like flies.”

When I read Unz’s analysis, it brought to mind an incident in the American bombing campaign against Serbia in 1999. The US bombed the Chinese Embassy in Belgrade, and I thought at the time that the attack was deliberate. American military assaults on China go back a long way. Unz agrees. “The [British] Sunday Observer published a remarkable expose in October 1999, citing several NATO military and intelligence sources who fully confirmed the deliberate nature of the American bombing of the Chinese embassy, with a US colonel even reportedly boasting that their smartbomb had hit the exact room intended.”

Even if the American warmongers don’t succeed in provoking a disastrous military conflict in China, we have much to fear. As Murray Rothbard has taught us, the State has throughout history been the great enemy of liberty. The monstrous controls over the American people and over our economy are never going to be fully repealed, even if the coronavirus goes away. The great historian Robert Higgs in Crisis and Leviathan and other works has documented to the hilt the way in which restrictions imposed in emergencies have lingering effects. This is his famous “ratchet effect.”

Unz doesn’t mention Higgs, but he does call attention to a vital fact that makes it extremely likely that the restrictions will stay put, however bad their impact. I’ll conclude with his incisive comment: “But as we see absolutely demonstrated in our daily news headlines, America’s current government is grotesquely and manifestly incompetent, more incompetent than one could almost possibly imagine, with tens of thousands of Americans having now already paid with their lives for such extreme incompetence. Rationality and competence are obviously nowhere to be found among the Deep State Neocons that President Donald Trump has appointed to so many crucial positions throughout our national security apparatus.”