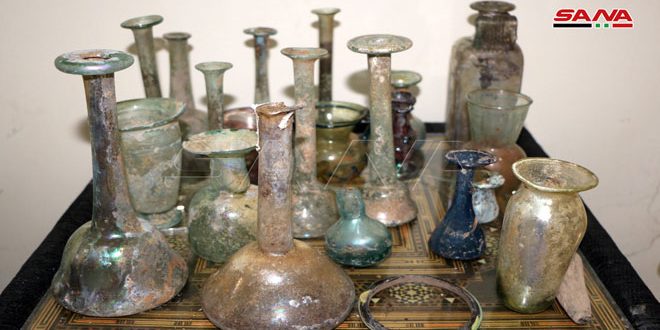 Daraa, SANA- Hundreds of archeological pieces have been handed over to Daraa Antiquities Department as they had been stolen by the terrorists from the archeological sites in the province with the aim of smuggling them abroad.

Head of the Department Mohammad Khair al-Nasrallah said in a statement to SANA on Wednesday that an operation of smuggling archeological pieces has been foiled by the competent authorities.

He indicated that the recovered pieces included pottery vessels of various sizes and 174 different glass vessels dating back to the ancient bronze, Roman and Byzantine ages.

Al-Nasrallah added that the department has documented the recovered items in order to showcase them in a future at the halls of the National Museum in Daraa according to the era to which they belong to.