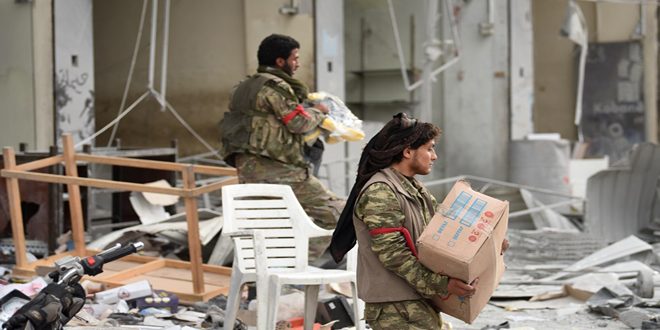 Local and media sources said that a civilian from the locals of Afrin was tortured to death  at one of the cells in the prisons of the so-called “Al-Hamzat Division- the Free Army” terrorist organisation which is one of the criminal tools of the Turkish regime in Afrin City in Aleppo northwestern countryside in parallel with kidnapping another person in the surroundings of the city by the so-call “al-Amshat Faction- the Free Army” and demanding a ransom of USD 3 thousand from his family.

Meanwhile, in Azaz City in Aleppo northern countryside which is controlled by the so-called “Free Army”, a person was found killed by unknown gunmen in a  recurring incident against the  locals in the areas which are the strongholds of terrorist groups that are directly linked to the Turkish regime.

Since it was occupied on March 18th last year, Afrin City and its countryside have been witnessing continued attempts by the regime of Erdogan to impose its schemes depending on certain practices which affected different walks of life such as replacing the names of certain areas and the main squares with Turkish names in an attempt to obliterate their real identity, in addition to imposing the Turkish language as a main subject at the schools and hoisting the Turkish flag on them.

Tens of media reports, in addition to local sources from the area have affirmed that the forces of the Turkish occupation in cooperation with their mercenaries of terrorists have forced the residents to make new identity cards to use them at the “official” directorates in the city in a way which recalls what has been done by the Zionist occupation in the Golan and Palestine.

The regime of Erdogan has also worked on obliterating the cultural and historical identity of the area through destroying all the archeological monuments in it which are icons that refer to the Arabism of the area.