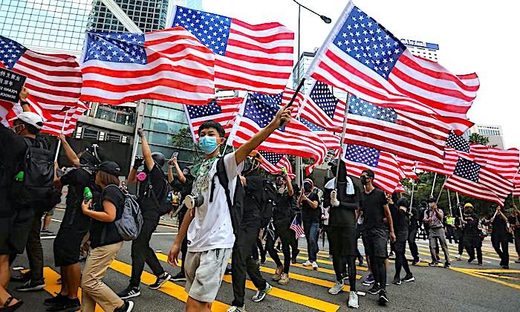 A government-run magazine in China has run a report alleging that money was being paid to young people in Hong Kong to take part in rallies and clash with police.

Earlier this month, the Liaowang Weekly (瞭望周刊), a current affairs magazine owned by the People’s Daily, ran a report on its WeChat account based on a widely-circulated post about how much the marauding mobs of thugs and anarchists rampaging through Hong Kong could get from agents implanted by the United States as well as their local fixers.

The magazine claimed HK$30,000 (US$3,830) was the sum a teenager received from his “escort” after joining other youngsters in recent anti-government rallies that usually ended in running battles with the police in the protest-weary Hong Kong.

According to the Beijing-based magazine, payouts would be determined by the size and level of the violence and whether a black-clad participant would dare to provoke or even assault sergeants and other police officers during the clashes. The more chaotic the rally became, the more they could expect to make. 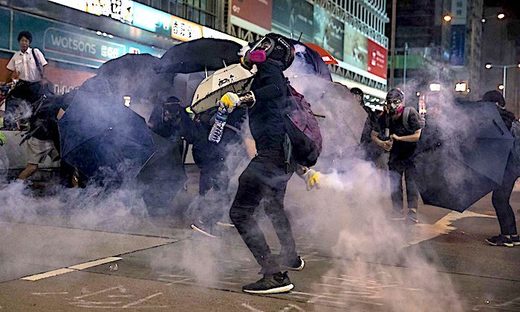 The average amount for showing up at a rally was said to be HK$5,000 per person, and after fatigue started to kick in and a ban on masks was gazetted by the city’s government in early October, the “honorarium” had been raised to as much as HK$15,000 per day to woo more to join.
The report also claimed that the lion’s share of the “ringfenced fund” from those who “orchestrated Hong Kong’s months of unrest” would have already been pocketed by the recruiters, while the remainder would be handed out to the young, hired protesters.

The report went so far as to suggest a HK$20 million bonus was announced for anyone who could pass as a constable and kill a protester, preferably in front of cameras, so as to incriminate police officers.A smaller sum was also offered for carrying out arson attacks across the city.

So where was the money coming from?

The report alleged that American NGOs which had a covert network of contacts and agents to penetrate university campuses were the main culprits and source of the fund. It added that they channeled money to student unions, religious groups and local pro-democracy outfits to recruit and reward protesters.

Specifically, the piece said NGO the National Endowment for Democracy was the mastermind behind all the protests, which, through various donations, “aided and abetted” three prominent local parties – the Hong Kong Confederation of Trade Unions, the Civil Human Rights Front and the Hong Kong Human Rights Monitor – to whip up people’s fears of a China extradition bill, the direct cause of the protests, ferment discontent and organize rallies. 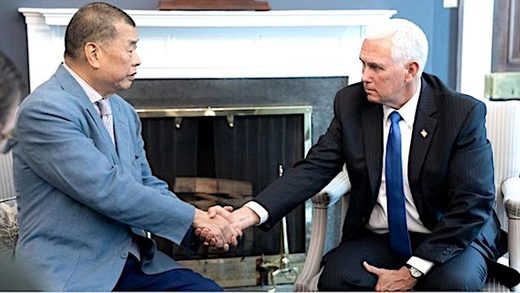 The volley of accusations also included Jimmy Lai, a prominent tycoon in the city who had long been a thorn in Beijing’s side and is the owner of the city’s widely-read pro-democracy broadsheet Apple Daily.

It said Lai, who acted as a broker and middleman to allocate other funds, cashed out after the share price of his listed media company surged mysteriously since June, the start of Hong Kong’s anti-extradition bill protests.

Lai has repeatedly denied any links with US parties, NGOs or politicians or any involvement in their activities in Hong Kong, stressing all the allegations were unsubstantiated and that Beijing should produce concrete proof to back its claims, if it had any. 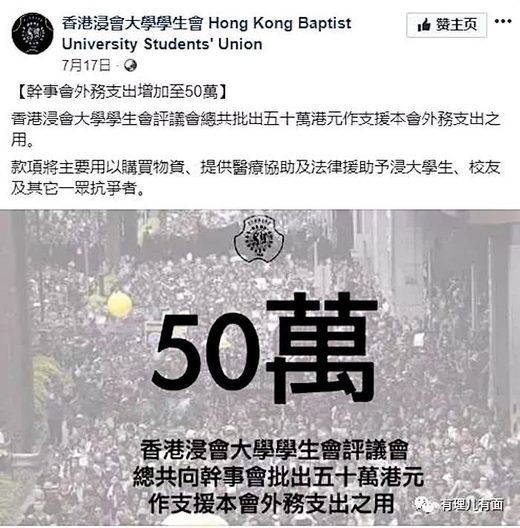 © Student Union
The students association at the Hong Kong Baptist University announced on its Facebook in July a lump sum allocation of HK$500,000 to purchase protective gear, offer medical treatment to injured protesters and hire lawyers for detained students.

Still, one piece of evidence cited by the report is a HK$1.03 million appropriation by the Hong Kong University of Science and Technology Students Union in July, when protests started to become violent, to purchase protective gear, offer medical treatment to the injured and hire lawyers for detained students.

The report questioned how a student body could allocate such a “hefty sum” out of its own coffers and questioned where the money came from.

The student body at the Hong Kong Baptist University also set aside HK$500,000 in the same month for protest-related expenses.

The magazine concluded that student associations could have been approached by American NGOs and members of the local opposition camp to mobilize youngsters.