The Grayzone‘s Aaron Maté has published some explosive new leaks from the Organisation for the Prohibition of Chemical Weapons (OPCW) which make it clear beyond a shadow of a doubt that the organisation, and the narrative managers associated with it, have been lying about the investigation into an alleged chemical attack in Douma, Syria two years ago.

In May of last year an Engineering Assessment signed by South African OPCW inspector Ian Henderson was leaked to the Working Group on Syria, Propaganda and Media, saying in direct contradiction of the OPCW’s official findings that the chlorine cylinders allegedly dropped upon the scene via aircraft were in fact “manually placed” there. Since Douma was then occupied by the Al Qaeda-linked and Saudi-backed Jaysh al-Islam group, who were fighting against the Syrian government, this would mean the Syrian government was not responsible for whatever killed dozens of civilians. And it would have the very serious implication that the US, UK and France launched airstrikes against the Syrian government on false grounds.

From the moment Henderson’s leaked document first emerged, both the OPCW and the establishment spinmeisters responsible for managing the imperial narrative on Syria have been dismissing Henderson’s Engineering Assessment on the grounds that he was not a part of the OPCW’s Fact-Finding Mission (FFM), the team which went to Douma to investigate the incident. Since that time mountains of evidence have surfaced both corroborating Henderson’s assessment and revealing that attempts to portray him as not a part of the FFM are disingenuous pedantic manipulations at best, but these new leaks by The Grayzone are the first hard proof we’ve seen that this spin job was actually an outright, bald-faced lie. 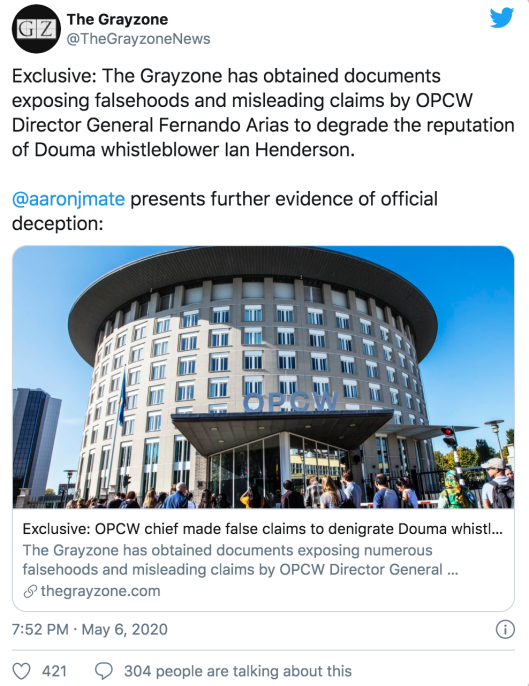 The leaked documents include an OPCW security-planning memo labeled “MISSION PERSONNEL” which plain as day lists Henderson as a member of the FFM. The documents also include a letter from the office of then-OPCW Director General Ahmet Üzümcü explicitly asking that Henderson take leadership of inspections in crucial locations, in direct contradiction of the assertion by current Director General Fernando Arias that Henderson only played “a minor supporting role in the investigation of the Douma incident.”

He lied. The Director General of the OPCW lied to the world about the Douma investigation. These new leaked documents show clearly and unequivocally that Henderson was a part of the FFM and played a major role in the investigation, and that we were lied to about both of these things by OPCW officials.

“Let me first turn to the findings of the investigation with respect to Inspector A,” Arias said in a statement this past February, with ‘Inspector A’ referring to Henderson. “Inspector A first worked for the OPCW from June 1997 to December 2005, eventually being promoted to Team Leader. He was rehired at a lower level in June 2016 and worked at the OPCW until May 2019. Inspector A was not a member of the FFM.”

“Inspector A was not a member of the FFM, and his name is not included in the mandates issued for FFM deployments,” reads a February note by the OPCW Technical Secretariat. “He provided support to the FFM team investigating the Douma incident since he was at the command post in Damascus at the relevant time. It is customary for the inspector serving at the command post to provide assistance to the FFM. Inspector A played a minor supporting role in the FFM investigation.”

These were lies, and they were smears. They’ve been repeated and reiterated in various ways since the OPCW scandal first emerged, and have been uncritically repeated as fact by news agencies like AFP and Reuters, as well as establishment narrative managers like Bellingcat, Idrees Ahmad, Nick Waters, Brian Whitaker, and Eliot Higgins.

They have been thoroughly discredited, and Maté reports that more is on the way, writing that a “part two of this article” will soon address the smears which have been leveled at the second OPCW whistleblower. 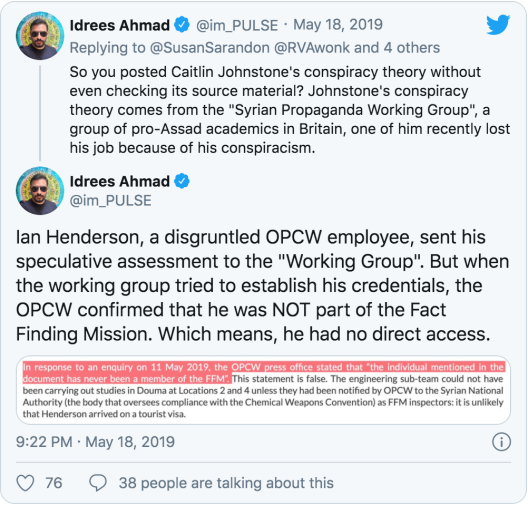 It has been revealed over the course of the OPCW scandal that US officials have attempted to interfere in the investigation and cajole OPCW inspectors into coming to conclusions which implicate the Syrian government. This would not be the first time the US government threw its weight around to make the OPCW fall in line with its regime change agendas, with threats to cut organisation funding and John Bolton reportedly even threatening a Director General’s children in order to help manufacture the case for the invasion of Iraq. Bolton, for the record, was Trump’s National Security Advisor throughout the entirety of the Douma investigation.

We were lied to about Douma, and we’re being lied to about the coverup. The US has a lot invested in its ability to launch military strikes based on scant or nonexistent evidence without international backlash, so there’s a lot at stake for the corrupt mass murderers in charge of the most powerful military force in the history of civilization. It makes perfect sense that they are doing everything they can to hide the truth.