An overview of the situation so far:

The US interfered in the removal of the elected Prime Minister on the grounds that he was un-American. The US supports the corrupt President that was not elected, US puppet Hashim Thaci, the most hated man in Kosovo. The other US puppet is Isa Mustafa, who is just as corrupt and worried as the new leader Albin Kurti, wants to convict all the corrupt politicians, Mustafa was the one that implemented the removal of the government. The Albanian population that were probably the only country in the world apart from Israel that loved the US for liberating them, now hate them.

Albin Kurti’s party Vetevedosje, have had the most votes at the past two elections yet every time the US has interfered to make sure they will not rule. The US have made no secret over the years that the do not like the Vetevendosje party and will stop at nothing to stop them. Now the opposition leaders are called traitors of the country and when Thaci visited a quarantine centre this week he was welcomed with shout of ‘get out traitor’. Once the coronavirus shutdown is over, there will be huge demonstrations against the US and their puppets.

read the latest article below. 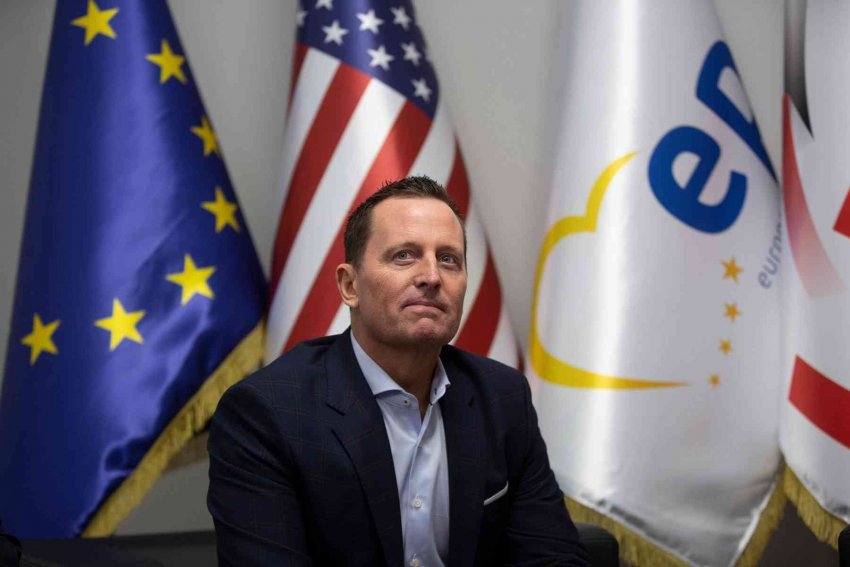 These days there has been a wide discussion about what happened in Pristina. The discussions were further prompted by a joint statement by Ambassador Grenell and US diplomat Palmer, as well as Mr. Grenell’s interview on a Kosovo TV. The whole debate is about the American position on the most sensitive issue of debate, the exchange of territories or, as we call it, the partition of Kosovo.

Even after the statement by the two diplomats and Ambassador Grenell’s interview, the issue still remains vague, unclear, and even entangled in a maze. There are hundreds and thousands who have found the answer when they say “We are allies and lifelong friends with the US”! “Grenell and Palmer clearly gave the answer to this dilemma”! “We trust the US because America has liberated us!” And all of this has an indisputable truth. If it had not been for the American commitment of the senior Bush administration, Bill Clinton and Bush junior Kosovo would not have been liberated and would not have formed its citizenship.

But I can’t say that about the Obama administration and that Trump. The latter is not indifferent, such as that of President Obama, to Kosovo. It is even very active. Grenell can be compared to Holboroke and get the bulldozer name of diplomacy. But can it be marked in the history of Albanians as Holbrooke’s? Mr. Grenell himself in his interview left many shadows of doubt about it.

He says I have not seen any project that seeks to divide Kosovo. But it does not say that this project does not exist, nor does it say that the United States will not under any circumstances accept such an idea cooked in Belgrade kitchens. He said that the US respects the constitution and on that basis the institutions of Kosovo should exercise its functions, but does not say why he himself did not respect the constitution of Kosovo when summoning the president in talks with Serbia, though the constitution and the constitutional court determine it is the prime minister the sole authority to lead negotiations with serbia. Grenell blamed Albin Kurti for not abolishing the tax without any conditions, but he did not once again blame the Serbian president for the hostile activity against Kosovo even though on the same day of January this year he had demanded in Pristina a tax abolition and in Belgrade a ban on recognition. Grenell said he respects the will of the sovereign in Kosovo, but did not explain why he supported the overthrow of a legitimate citizen will government!

If we were to list the contradictions between Mr. Grenell’s principle and his diplomatic practice, then we would have to add a dose of suspicion and speculation about the outcome of the Pristina-Belgrade talks. It is enough pressure until the overthrow of the 50-day Kosovo government to have this skepticism and suspicion. But doubts reinforce many other facts. It was Eliot Engel who raised great questions about the subject we are discussing. It is Daniel Serwer who always tells us that Grenell’s diplomacy on Kosovo is anti-Kosovo diplomacy.

And yet suspicious Albanians, those who are skeptical, are accused by taboo people of being “anti-American”! Kosovo’s president, Hashim Thaci and his propaganda machine, propagated this nickname very much, artificially fueling the disruption of leadership in what is called pro-American and pro-German.

The Americans, however, support and encourage Hashim Thaci’s secret talks with Alexander Vucic, while the Germans, English and French do the opposite! Grenell supports Kosovar politicians who are for the exchange of territories and topple politicians who oppose the option. All of this has created the impression and impression that Hashim Thaci is being supported in his project, Vucic and Edi Rama’s partition of Kosovo, even allowing him to speculate on “American support”!

Under these conditions, the Albanians, the most pro-American people in the world, have begun to split. Because President Thaçi has put the alternative “with us, against us”! Or “with America, or against it.” According to him, Albanians are not allowed to trust both Europe and America. But this conditioning creates irreparable psychological effects.

Let me illustrate it with my own experiences. Suppose someone has a friend for the head for whom he is ready to give his life. But at a certain moment, even in a difficult day for him, he sees the friend cooperating with his enemies. Doesn’t this person have the right to doubt his friend’s head ?! Would it be naivve to believe in the help, support and charities of the friend in the past ?! So it is between nations and states. If the US favors the enemy of the Albanians, Serbia, and puts pressure on Kosovo, the victim of Serbia, which has not happened in the past, then the confidence of the Albanians is naturally shaken. And if that happens, the frustration with Americans can be huge! This is not the desire of individuals, it’s an objective process that will happen and I don’t know what makes Mr. Grenell push the most pro-American nation in the world to be disappointed with America ?! It’s really incredible!

Trust reports are very delicate. They are created in great trials and fail in difficult times. The case of Kosovo is no exception, because no one in this country has expected Berlin to categorically refuse its partition, while Washington’s representative backs this project!